Our next destination was Hsipaw town. To go there we took a bus to Mandalay. For 10 dollars it was super-mega bus with air condition, large sits, free water and David Copperfield show!

Due to Myanmar tradition, the bus arrived to Mandalay at a night time. The other problem was bus station. Mandalay have few highway bus stations and all of the, located few kilometers from each other. The bus to Hsipaw will departure in 6 a.m. from the one bus station, but we arrive to another at 5 a.m. Taxis were offered for 5-7 dollars but it was very expensive for us. One local guy agreed to drive us by his motorbike for 1500 kiat.

The tickets from Mandalay to Hsipaw cost us 6000 per person and the trip took 6,5 hours.

To be honest we did not like Hsipaw so much, Kalaw was much interesting and quite. The hills around Hsipaw are also popular for trekking and hiking. We done some small treks to hot spring and through some villages, they was very good. 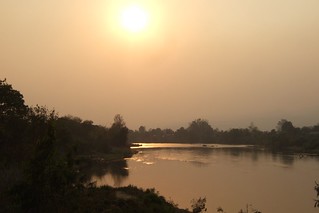